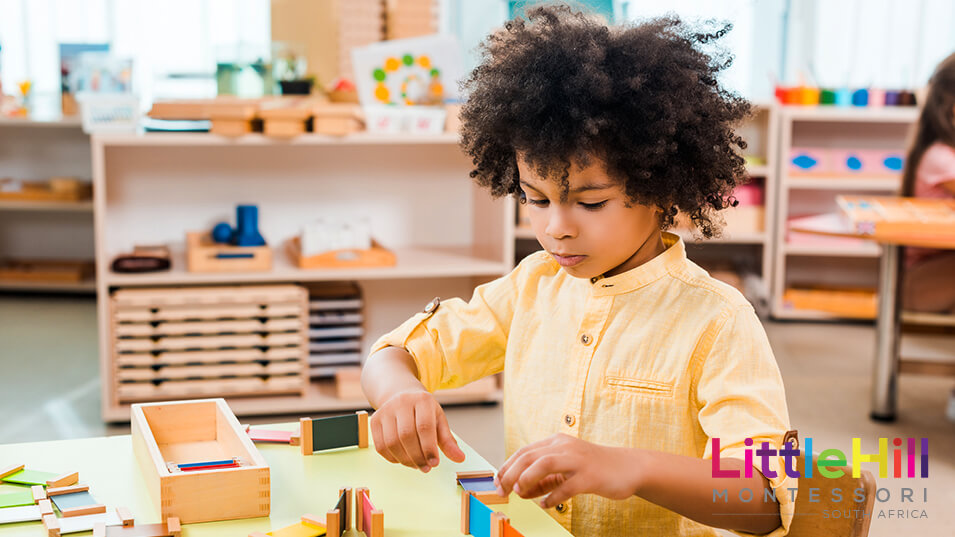 Montessori has fast become a household name in South Africa as an alternative form of education for children. However, there is still some mystery around what exactly the Montessori philosophy entails and how it differs from a more traditional way of schooling.

In a nutshell, Montessori is a holistic approach which values all areas of the child’s development: physical, social, emotional and cognitive. This child-centered method of education involves child-led activities (referred to as “work”) in classrooms with children of different ages, guided by a directress (teacher) who encourage independence among the students.

Above all, the Montessori philosophy is meant to be an “aid to life”, a methodology to help each child fulfill their unique potential, discovering and developing their personal contributions to the world.

Maria Montessori, founder of the Montessori philosophy, was born in 1870 and became Italy’s first female medical doctor in 1896. She opened the first Montessori school—the Casa dei Bambini in Rome on January 6, 1907, to provide education to low-income children. Instead of using traditional teaching methods, Dr. Montessori began testing her own child-centered educational theories. She designed a revolutionary educational philosophy that builds on the way children learn naturally, rather than fights against it. Today, these schools are known as Montessori schools, and are based on several foundational principles.

Montessori classrooms have mixed ages and skill-levels, usually divided into three year groups, to encourage peer learning. These mixed-age groups allow children to learn from one another, teach one another and develop life skills such as inclusion.

A Montessori teacher is called a “directress” by Dr. Montessori, and sometimes a guide, as they tend to guide and direct rather than instruct. It is the directress’ job to observe the children and “link” them to their environment through individual lessons, which are given at each child’s own unique pace.

In a traditional school, students learn by sitting at desks, listening to the teacher talk and memorising facts. Montessori schools on the other hand, learn through experiences. For example, children work with specially designed materials, and begin by counting and adding concrete materials. They use a set of wooden letters known as the moveable alphabet, to learn to read and write.

A prepared environment simply means that the classroom is designed with everything children need to explore and learn independently. The shelves are low and filled with beautiful objects, so that children are enticed to reach them and encouraged to work. Classrooms are typically minimalist, and everything is carefully organised, with each item having a specific spot where it belongs to encourage a sense of order.  The colours in the classroom are mostly muted and there is plenty of natural light to foster concentration.

Montessori schools include math, language, cultural studies, practical life and sensorial. LittleHill Preschool provides an environment where learning through our senses is fostered both inside and outside the classroom. Practical life helps children learn skills used in everyday life, such as how to carefully pour water, tie their shoelaces and clean a table.

Dr. Montessori believed that children learn better when they’re choosing what to learn. For this reason, they are given more freedom than they would have at a traditional school. The children choose where to sit and what to work on, with guidance from the directress. However, this should not be interpreted as “let kids do whatever they want”. Just as the real world has limits, so does a Montessori classroom. As children get older and learn how to make appropriate choices, they are given more and more freedoms.

Each of the children in a Montessori classroom are at different academic levels. Rather than focusing on group lessons, the directress gives one-on-one lessons, depending on the child’s specific level and needs.

There is a great emphasis on the importance of peace and community, both in the classroom & in the world. Children learn the tools for calming themselves and conducting peaceful conflict resolution.

Montessori schools have long, uninterrupted work periods which generally last 2-3 hours, that includes all subjects. This encourages children to reach intense concentration and to engage with the Montessori materials.

Want to Know More about Montessori?

If you’d like to take a peek inside a Montessori classroom, or simply learn more about LittleHill, you are welcome to arrange a tour of your nearest LittleHill Montessori school.

Coming soon to a Suburb near you